Melanie Robertson-King's debut novel, A Shadow in the Past, is a Sweet Time-Travel Romance set in Scotland. 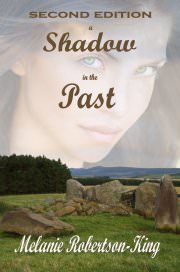 When a contemporary teen is catapulted back in time to the Victorian era, she becomes A Shadow in the Past...

Nineteen year old Sarah Shand finds herself in Victorian Era Aberdeenshire, Scotland and has no idea how she got there. Her last memory is of being at the stone circle on the family farm in the year 2010.

Despite having difficulty coming to terms with her situation, Sarah quickly learns she must keep her true identity a secret. Still, she feels stifled by the Victorians' confining social practices, including arranged marriages between wealthy and influential families, and confronts them head on then suffers the consequences.

When Sarah realizes she has fallen in love with the handsome Laird of Weetshill, she faces an agonizing decision. Does she try to find her way back to 2010 or remain in the past with the man she loves?


NOW AVAILABLE FOR THE